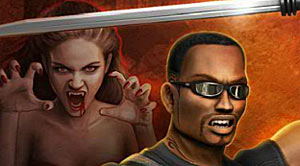 Who’s the baddest half-mortal, half-vampire you know? Channeling his martial arts skills into some deadly swordplay and combining that with his fictional vampiric abilities, your answer better bloody well be Wesley Snipes’ Blade.

Starting back in 1998, Blade turned into one of the coolest and most memorable action/horror trilogies. The Blade films have also seen a who’s who of cast members, including Stephen Dorff, Kris Kristofferson, Ron Perlman, Norman Reedus, Parker Posey, Jessica Biel, and Ryan Reynolds. There’s no doubt that you recognize most of those names, however, a couple of them were just starting out at the time, such as The Walking Dead’s Norman Reedus and The Amityville Horror and Green Lantern’s Ryan Reynolds.

So how would you like to play a game that combines said badass half-breed vampire and the chance to win some silver (because we all know that silver kills vampires)? Who knows, the rush you get from the bloody visuals and the gruesome sound effects just might translate into good luck and good fortune.

All you have to do is download the gaming software and set up a real money account. Then point your cursor to the Blade slots at Casino.com and slay away at some of the undead. Oh, sign up now and you could open the crypt to a $3,200 Welcome Bonus! Sweet, right?

Have a look at some of the game features:

This is a 20-payline, 5-reel multi-line slots game. The Blade symbol acts as wild and if you hit at least 3 of them you will be rewarded with 15 free spins and varying amounts of bonus multipliers. Furthermore, if you get a Blade symbol on the fifth reel it counts as two Blade symbols, meaning that if you have five of a kind, it actually becomes six of a kind, increasing your jackpot prize! This game also contains four progressive jackpots, the biggest of which is known as ultimate power, followed by super power, extra power, and power. So there is simply so much to play for.

If Blade isn’t your thing, Casino.com also has other Marvel properties to play, such as Daredevil (which has a cool bulls eye feature that could triple your winnings) and Fantastic Four (and despite its name, the game actually has five wild symbols, the members of the Fantastic Four plus Dr. Doom, to help up your winnings). As you can see, it’s all about giving you some superhuman powers to help you win some loot.

So, do you have the chops to take on the undead as Blade, or other Marvel villains, and win some coin?