Star Wars Infographic: How Much Would It Cost To Build The Millennium Falcon? 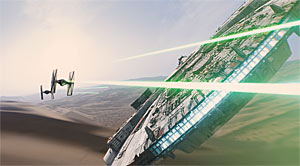 Get your Star Wars nerd-boner ready, because we got an infographic that is guaranteed to excite you. Remember that ambitious Death Star petition the White House rejected in 2013? Well, if that project ever got approved, it could have costed tax payers roughly $852,000,000,000,000,000 to build, according to Lehigh University students.

What if Star Wars fanatics signed a petition for something a little more realistic to build? Perhaps Han Solo’s famous Millennium Falcon? It’s much smaller and requires less steel composition to build. Plus, our technology has come a long long way since 1977. Alright, so maybe our technology isn’t quite there yet, but when we do get there in the future, we at least now know how much it would cost to build the Millennium Falcon.

Check out the infographic below for the price breakdown.