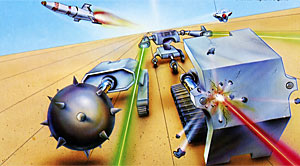 Video game genres are very, very diverse. They range from text adventures to massively multiplayer role playing titles, from pinball simulators to slot machines; you can visit europalace blog for more info on the latter. But there was always a first. And sometimes these “firsts” are older than you can imagine.

There is no reliable information about when the first FPS title was completed – what’s certain, though, that Maze War development started in 1973. As you might expect, it was not just revolutionary, but also a source of influence for generations of FPS and RPG games to come. Basically, Maze War was the prototype for your average deathmatch, with players wandering around in a 3D maze, and shoot each other on sight. They scored points for shooting an enemy, just like in later releases. What makes Maze War even more interesting that it offered network play for the first time in history.

The genre that gave us titles like Amnesia, Silent Hill or Alien: Isolation, started with a 48K piece of software in 1982. The program was called 3D Monster Maze, and was the first game to feature an unarmed player having to escape a monster coming to eat it. In its case it was a T-Rex, and the player was constantly notified if the monster became aware of its presence.

While the term “survival horror” was coined by Resident Evil much later, 3D Monster Maze is considered the pioneering title of the genre.

Also released in 1982 (which apparently was a great year for gaming), Cytron Masters was the first game to be considered a real-time strategy title. Running on the Apple II, the somewhat chess-like game introduced concepts like the Command Center, and other four units with their own abilities (shooters, mines, bunkers and missiles). Players also needed to collect energy from the 8 generators scattered on the playfield – much like resources are gathered in modern variants.

Fortune Builder – The alpha of simulations

While many sources consider SimCity (released in 1989) to be the first simulation video game, the credit has to go to another title. Fortune Builder was released on Colecovision (a gaming console in the early 1980s) in 1984. The game was more complex than Sim City – it started with a fictional map with plains, lakes and mountains. And it also had a goal: to reach a specific net worth by the end of the game. It had complex algorithm to calculate the effects of buildings on other buildings’ earning potential – like, when placing a factory next to a resort. And it also had a two-player, split-screen game mode to make it even more interesting.