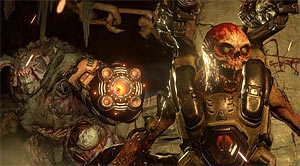 id Software proudly announced today the dates for Doom’s open beta run, which will be available to everyone, and won’t require any special codes to access. From April 15 through 17, players will simply be able to logon to the platform of their choice and download the beta to access Team Deathmatch and Warpath on the Heatwave and Infernal maps.

According to the developer, these maps and modes are just a fraction of what players will experience when the game launches in May. Bethesda Softworks, the publisher behind the new Doom previously released a series of videos, which explored some of the maps mentioned above, modes and power-ups of Doom’s multiplayer. If you missed them, then you’re in luck because we have embedded them for your convenience right below.

Doom officially launches on May 13 on Xbox One, PS4 and PC. The first DLC ($14.99) will be available this summer and gives player access to the following.